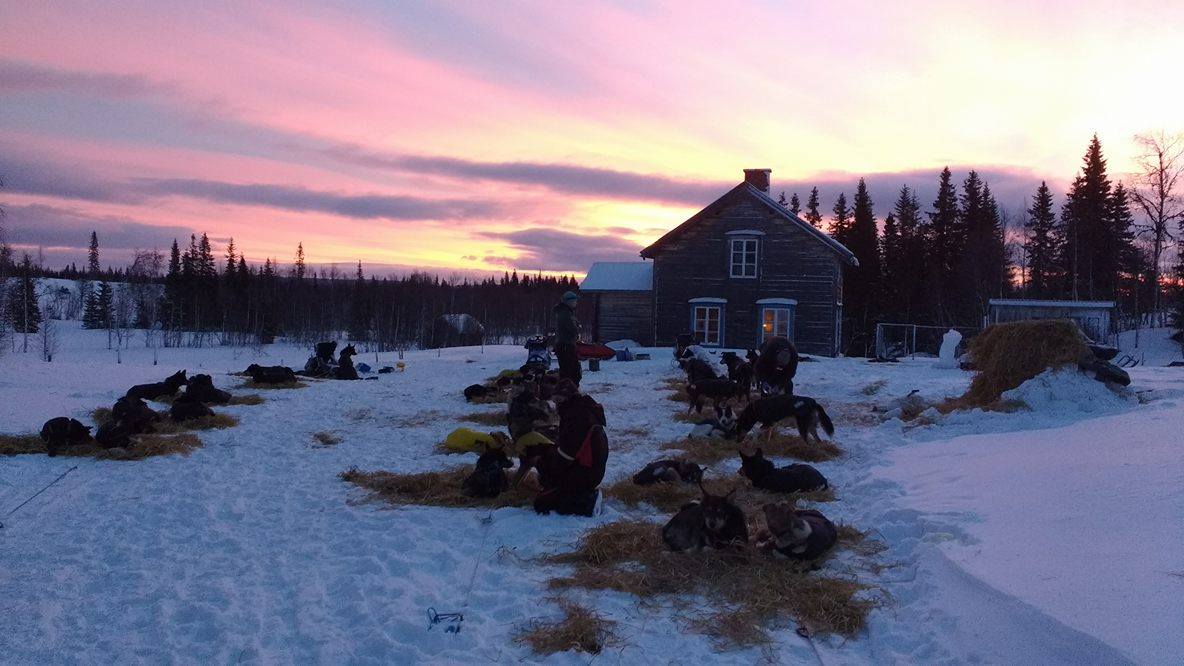 Late nights and early mornings, that’s what makes a competitive musher’s world go round. Count the booties, cut the snacks, pack the sled, realise you forgot 10 things, repack the sled. For months, everything has been leading to this moment, focused on the Metsjövidda Fjäll Race and yet somehow there is still so much to do in just a few short hours.

I was 2nd in the draw for the Metsjövidda Fjäll Race starting order. My team of enthusiastic if inexperienced yearlings should have started at 6:02, just after Petter who drew first (!) but alas, I’d slept in and was still running around sorting the last details 10 minutes before that. Thankfully with a lot of help from race marshall Holly, master of ceremonies Angela and race vet José I started only 20 minutes after the others Petter, Bent and Marlin.

So at last we were off – Skunk, Helia, Knacke, Bruno, Boy, Poker, Atlas, Harley, Bambu, Klara, Berry and Helen (that’s me) off for the longest run of our lives, the team completed by Fifi who’s an A-Team dog with far more experience than the rest of us, joining for an easy run because she’s just recovered from a slight pulled wrist.

For the first few kilometres I cursed myself – how could I have made such a mistake!? But it wasn’t long before I had a change of heart. As the trail snaked toward Järvsjön we ran through massive furrows in the snow, the sides of the trail were half as tall as my dogs in many places. Phew, I thought to myself, thank goodness I was late. I wouldn’t have fancied ploughing my team through that. As it happened, I had a clear run to our first checkpoint and arrived with a happy, energetic team that wasn’t the least bit interested in resting.

In the mood or not, resting is essential for young dogs and resting is what we would do. I knew the next section of the trail was 67km and there was talk of a coming storm which could make it a heavy run. I had already seen snow whipping around the marshlands on our way to the checkpoint, the wind that carried it from place to place often deposited it in the trail, obscuring the way from view.

After soup and sleep and coats and booties it was time to set off on the next leg of our journey, into the Vindelfjällen Nature Reserve, across the Väretsfjallet range and great Överst-Juktan before resting in Aivak. The run started very well – my team knew the first part of the trail well and the winds snaking snow into their eyes and fur didn’t seem to dampen their spirits at all. When we left the familiar trail and ran into unknown mountains they seemed energised by the novelty.

As night fell the winds grew stronger and stronger. The trail led us to run directly against it. Sometimes it felt like it was snowing heavily but that was an illusion caused by wind picking up snow and flinging it with force like a spiteful child with an endless supply of sharp snowballs.

But it would take more than that to stop Helia and Skunk. I was delighted to see some recent bad weather training runs we’d done really pay off as Helia especially followed the small wooden sticks marking the trail wonderfully well. As the hours passed the wind reached a level where I couldn’t see past the end of my string of 12 dogs, let alone into the night to spy the sticks, but again and again the sticks flew past. Good, we’re on the trail. Good, we’re on the trail.

We wind had reached a fever pitch, a chaotic howl that rendered you blind and deaf and stole the words from out of your mouth. It was too much for my dogs who after many kilometres of running directly into this savage wind ran a wide arc to the right to find some relief from the brutal blasts.

And so began some slow, slow kilometres. I changed my leaders, I ran in front of the team, I did everything I could to get them through this wind and we fell into a pattern of running a few feet and then concertinaing into a ball of dogs. I would untangle the dogs, line them out, run ahead, we’d go a few feet and then do it all again. It was tedious to be sure but it was working. We were making slow, painful progress.

Then, impossibly, the strongest wind I have ever experienced got stronger still. My tactic of running in front of the sled stopped working when I could no longer walk into the wind myself. It was time to beat a hasty retreat. Luckily, Petter had blown through the first checkpoint and had opted instead to rest for some hours at the base of the mountain, and there was straw there we could use for our own well-earned rest. So we turned around and started back.

Getting down the mountain was almost as tough as getting up had been, albeit much faster! The dogs were so eager to get away from the weather they were pulling against me, trying wild runs down steep slopes. We lost the trail a few times and found ourselves in deep snow, but eventually we got back to Petter’s resting place, a small sheltered valley, and they were bedded down and fed in short order. Once my chores were done I slipped into a wind bag and lay down by my leaders, their warm backs a comfort as I gazed at the stars and considered my next move.

The storm was forecast to go on all night, there was no getting over the mountain for me. After a 4 hour rest I decided to cut straight to the next checkpoint at Sörgården and take it from there. From then it was plain sailing, stormy and windy to be sure but away from the exposed heights of the mountains and wind-tunnel gullies it was easy for the team to handle.

We got into the next checkpoint in Sörgården in good time and my team seemed tired but happy. After a big feed and a big sleep it was time to check them out. Our race vet, canine chiropractic expert José took a look through the team. He found them to be in overall good shape but with some early signs of strain on some muscles. Considering that they are young, and the next stage would again be heavy and stormy his recommendation was that we scratch from the race, take a nice easy run home and keep their spirits up and their bodies in great shape.

So my race ended there. It was great to be part of it, and I was so proud of what my team managed to do. We’ll be back for more at the Metsjövidda Fjäll Race next year!