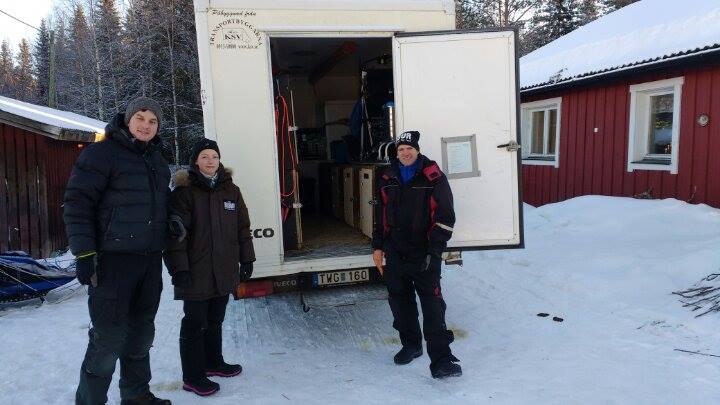 While the excitement of a race may begin for most when they see the teams jumping and barking on the starting line, any musher (or handler!) will tell you that the months, weeks, days and hours leading up to it are often just as much of a whirlwind. The days before this year’s Femundløpet have been even more hectic than usual for Team Petter Karlsson.

Petter set off in the dog truck (painstakingly packed by Angela and Holly, given a new interior design by Bent) on Wednesday morning, in plenty of time to meet friend of the kennel, dog chiropractor and vet José and set up everything he needs for the race.

You may have heard the phrase “the wheels came off” when calm turns to chaos. Well for Petter that phrase came literally true, since as he was driving toward Vilhelmina he was surprised to see his back wheels roll past the truck and down the road. He brought the truck to a screeching halt and luckily neither he nor the dogs were injured. After a valiant attempt to sort it out himself (!) he called Angela and a tow truck which was able to get to him in good time.

But the story doesn’t quite end there – while he was waiting for the tow truck Petter thought he’d make himself useful and collect all the nuts that had come off the wheels on to the road. He was making progress and had found two when – fie! – a big old snowplow drove down the highway, throwing snow all over everything and hiding the remaining bolts till the summer.

But he got there in the end with the help of the tow truck, and is ready with his team of Hugo, Moscow, Hog, Texas, Piko, Easy, Odin, Lilly, Hippo, Lemmy, Stallone and Svartis.

Good luck to Petter and all the teams, we hope they have a great race!

1 thought on “Road to Femundløpet”